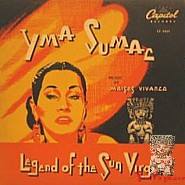 A review is available. The Tiki logo is not on the actual artwork.

Historical notes
Liner Notes
Yma Sumac was a new artist in a new country when her first album, "Voice of the Xtabay" appeared.  Since that time, not so long ago, her success has made record history.  And her amazing four octave range has been heard in every corner of the civilized world, to delight listeners of all ages.

A native Peruvian and direct descendant of the Inca Kings, Miss Sumac draws the inspiration for this new album from her colorful background and heritage.  The ancient Incas worshiped the Sun God and the Moon Goddess Quilla.  Every year the most beautiful maidens were selected to become Virgins of the Sun, serving in the convent which rivaled in splendor the Inca's palace.

The sacred flame was entrusted to the Virgins and if by neglect it was allowed to go out, it was believed that some terrible disaster would follow.

The Virgin assumed holy vows which bound her to the temple service.  Should she prove unfaithful to her vows, she was buried alive, while her lover was strangled, and the village to which he belonged razed "so that no stone stood upon another."

Show others with this title (22 entries) Back to Top