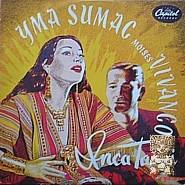 A review is available. A copy exists in the Archives in case there are specific questions about it. The Tiki logo is not on the actual artwork.

Historical notes
Liner Notes
Down from the towering Andes comes the exotic music of an ancient civilization, sung by a fabulous Princess of its people.  The lovely singer is YMA SUMAC and her music is INCA TAQUI, Chants of the Incans.

For three thousand years music has played a vital role in every activity of Inca life, and musicians have been the most honored members of the Inca community.  Yma Sumac brings to the outside world the fullness and beauty of her people's spirit, singing traditional chants in a voice of magnificent range and emotional power.  The language of the chants is K'eshwa, still spoken today by twenty million South Americans.

Moisés VIVANCO is an eminent authority on ancient music; he has drawn carefully upon native Incan melodies and rhythms in composing and direction the selections for this unique album.

Hide listing
Other entries with this title
7" EPs
Inca Taqui

catalog no: LAL 9023
10" LP pressing of Yma Sumac's third album, recorded in 1953.  There were few reissues because it was later paired with Voice of the Xtabay as the second side of the 12" LP format and on nearly all releases under that title.  Today it is generally considered a part of the Xtabay album. 1953 United States
Inca Taqui

catalog no: H-423
One of the few known releases from Columbia, it was apparently released in the U.S. printed sleeve. 1953 Columbia
Inca Taqui

catalog no: L-423
Unusual South American pressing with wood grained borders printed with the cover art, rather than the 7" cover art being pasted over a standard bordered 10" sleeve. 1953 Argentina
Inca Taqui

catalog no: L-423
Unusual European pressing with woodgrained borders printed with the cover art, rather than the 7" cover art being pasted over a standard bordered 10" sleeve. 1953 France
Inca Taqui

catalog no: L-423
This is an early pressing of Yma Sumac's fourth album, and one of only a few reissues. 1954 United States
Inca Taqui

catalog no: OLP-1
Reissue of third album with different cover art, featuring a still from the 1954 film, Secret of the Incas.  Mfg. by Tokyo Shibaura Electric Co, Ltd.  Back cover has only track listing for this and two other albums in the series - no liner notes. 1956 Japan
Inca Taqui

catalog no: UV093
Recent 10" LP release of Yma's third album with the original eight tracks. 2003 Italy
Back to Top